Does lungworm in foxes pose a risk to your dog?

You may have heard of lungworm and how it can affect dogs – but what about fox lungworm?

For over 10 years, Professors at the University of Bristol and the Royal Veterinary College have conducted studies into how common lungworm is in foxes. They have recently reported that the number of infected foxes has grown rapidly in Britain, most significantly in Greater London, with approximately three in every four foxes found to be carrying lungworm.

"We found that the overall prevalence of lungworm infection in foxes was very high in Greater London, at just under 75%, and that prevalence was maintained at this level throughout the year.  We investigated why ‘hot spots’ were seen in these locations and, apart from land type, dog density and climatic factors, we found that the simple presence of foxes locally increased the risk of lungworm infection in dogs five-fold."

But, it is not just Greater London where lungworm prevalence in foxes is on the rise. Bristol University published a study in 2015, which found 18.3% of foxes across the UK were found to be carrying lungworm – this was more than double found in a similar study published 7 years before. 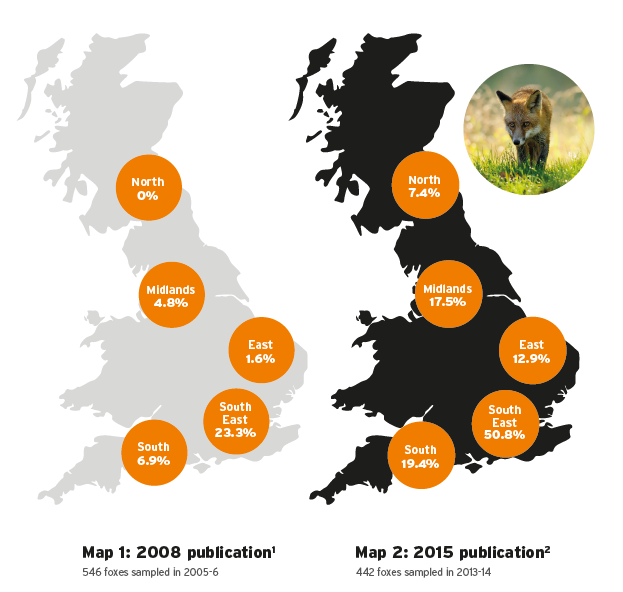 Do foxes pose a lungworm risk to my dog?

Foxes cannot directly infect dogs, but they contribute to the spread of lungworm. Dogs can contract the parasite by ingesting slugs and snails infested with lungworm spread via fox faeces, which contain the lungworm larvae.

A recent survey revealed that one in six dog owners across Britain have seen fox faeces in their garden in the last 12 months and one in seven have a fox regularly visit their home or garden - this shows there are plenty of opportunities for lungworm to spread into garden areas frequented by dogs.

I have a fox that visits my garden, how can I protect my dog?

The RSPCA advise that, if you regularly see foxes in your garden, you should not attempt to tame or encourage them - they have most likely already found a good food supply in the area. They also advise not to hand-feed them or put out food as foxes may not move far if all the food they need is available in one garden – they may bury some, defecate or cause other problems in neighbouring gardens leading to ill-feelings against the foxes.

The best way to avoid lungworm affecting your pet dog is to make monthly preventative treatment part of your dog’s regular anti-parasite routine from a veterinary practice, alongside worming and flea treatments. This routine will be all the more important if you live in an urban environment with a large fox population, such as Greater London, where the density of foxes is one of the highest in the world.

For more information about lungworm visit our guide on lungworm in dogs and to find out if lungworm is in your area, visit our lungworm map now.

About My Pet and I
Contact Us
Community Impact