Ticks are much more than just a nuisance to remove from your dog. Infected ticks can carry and transfer dangerous iseases, including Lyme disease, once they’ve latched on to an animal.

As with most parasites, prevention is better than cure. Follow these tips for dog tick prevention and you’ll help protect your dog against tick-borne diseases too.

Ticks are eight-legged parasites, which latch onto your pet to feed on its blood.

Often found lurking in grassy and wooded environments, they’ll sit on blades of long grass with their front legs extended – waiting, or ‘questing’, for their next meal. Ticks will wait until an animal (or people!) walk past before grabbing hold. Once they’ve made themselves comfortable, they attach and can feed on their host for days.

Why do ticks pose a danger to dogs?

Tick bites are irritating, particularly for pets that suffer an allergic reaction to them, and they can make dogs very ill.

Because they’re bloodsuckers, in some cases a large tick infestation can lead to anaemia – an illness that causes lethargy and may require a blood transfusion in severe cases.

Worse still, infected ticks carry serious diseases. There are various types of ticks that can affect dogs but it’s the sheep tick (Ixodes ricinus) – the most common tick in the UK – which can carry and transmit Lyme disease. This is a bacterial infection affecting the immune system and joints, posing a real risk to the health of both dogs and people.

Babesiosis is another tick-borne disease found in the UK, which both dogs and humans can contract although it’s rare. The dog strain, called Babesia canis, can be fatal.

How you can best protect your dog from ticks

The good news is you can prevent your dog picking up these parasites quite easily.

Ticks like to lie low, living close to the ground in long grass or leaf debris. When you’re taking your dog for a walk during tick season (which is generally the warmer months between March and September), its worth avoiding or limiting exposure to long grass, particularly if deer graze there.

A good tip is to walk in the centre of pathways away from vegetation along the edges, and avoid overhanging plants where ticks like to lie in wait for their next meal.

However, ticks can survive in many environments, so it’s important to remain vigilant at all times. For example, immature ticks (called tick nymphs) need humidity to survive and seek out shady spots. It means that, although ticks are associated with long grass, your dog can pick them up in the park and even in your garden if, it’s also home to wild animals.

2. Don’t forget to protect yourself during ‘walkies’

If you’re out walking in tick-prone areas, ensure you dress for the occasion so you don’t pick up any ticks yourself, which can put the whole household and your dog at risk.

You’ll want to cover your skin to prevent tick bites. Always wear trousers, not shorts, and tuck them into socks, so your ankles are covered. Always check your body for ticks after a walk.

If you’ve been out for a walk, it’s generally a good idea to examine your pet carefully once home for any ticks that might have attached on the way.

Be methodical: work up each leg, starting with the paws, then check the body from the rear to the nose, not forgetting the groin. Pay particular attention to the head, ears, legs and undercarriage as ticks particularly like to latch onto these areas. And ensure you check for ticks by parting fur against hair growth and with hair growth.

If you feel a small bump, this could be a tick, so be sure to investigate carefully without touching it with your bare skin. 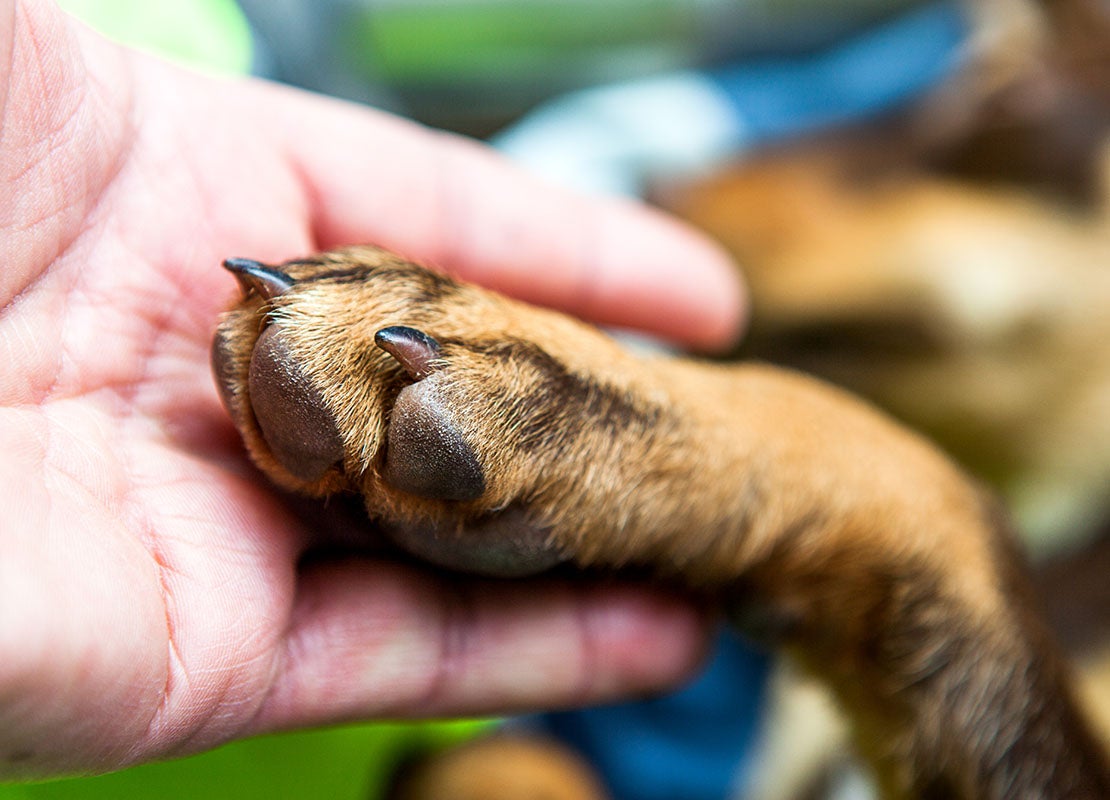 Some treatments kill ticks; others can be used for prevention repelling & killing ticks. Products act in different ways so you can discuss this with your vet to see what suits you and your dog.

Seresto Flea and Tick Control collar offers a convenient option for parasite control, giving 7-8 months protection all in a single application. The collar works by releasing low concentrations of the flea and tick fighting combo (imidacloprid and flumethrin) onto the waterproof layer of your pets skin and coat, and these are able to act through contact, meaning fleas and ticks do not have to bite your pet in order to be killed*, helping reduce the risk of canine vector borne diseases. Plus, it's innovative design means there is no mess, no smell, no grease, and no need to remember monthly flea and tick applications. Find out more here.

Before treating your pet, always check the expiration date on products you may have had in your cupboard for a while. If they’ve passed their best, they may lose effectiveness. It’s also worth finding out from your vet which products they recommend for best results.

Whichever tick preventative treatment you choose, it’s important to use it regularly to help keep your dog protected long-term.

You need to remove a tick immediately after finding it on your pet to restrict exposure to any infections carried by the parasite. It’s important that you know how to remove a tick properly to prevent disease spread and any harm to your dog.

Tick hooks are a simple device you can buy in high street pharmacies. Follow the instructions to quickly pull out the tick whole. Unlike tweezers, tick hooks are less likely to leave the tick’s strong mouthparts in your dog, which continue to pose an infection risk even when you’ve removed the rest of the tick’s body.

If you’ve spotted a hungry tick on your dog, use our guide on removing and killing ticks the right way.

Always contact your vet if you’re unable to remove a tick from your pet.

* Information is regarding mode of action and is not intended to imply parasites can be completely stopped from biting. An attachment of single ticks after treatment cannot be excluded; for this reason, a transmission of infectious diseases by ticks cannot be completely excluded if conditions are unfavourable.

About My Pet and I
Contact Us
Community Impact